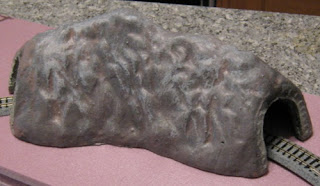 A tunnel is always an important part of our layouts, as it serves multiple purposes. On bigger layouts, a tunnel breaks up the train as it “disappears” inside the mountain for a short time, while on smaller oval or switching layouts a tunnel can serve as an area that leads to a place outside the layout itself. The only problem is that, if you don’t build the tunnel yourself, an inexpensive type of tunnel can look just like it is – a toy that has the basic shape but does not look realistic. However, there is a way to remedy this problem with a few cans of model paint, and the following is one type of example.

I used a very inexpensive small, curved N-Scale foam tunnel which was factory painted green, brown, and white, and all-white inside. First of all, tunnels are dark places where only trains and adventurous people dare to go, so the entire inside was painted black. It would be a good idea to also paint the roadbed a dark color, because when you look inside, the only things that should be seen are the locomotive headlight and the reflection on the rails.

The next step would be to paint the entire outside a gray color or even a combination of grays. When that dries completely, make a brown wash (to simulate earth) and spray or paint it on so it flows between the ridges in the rocks. Then paint the tunnel portals a concrete color to make them stand out somewhat from the rocks. After this, let the whole tunnel dry for a day or two, and to make sure you like the way it looks before going on.

When all the paint is dry, dry-brush all the rocks (especially the rocks on top of the tunnel) to simulate the effects of nature and sunlight. Dry-brushing, if you haven’t done it before, takes some practice. I have all the manual dexterity of your average water buffalo, yet learned how to dry-brush by trying it out on articles that won’t be used on a layout. The important part is not to use too much white paint, just enough to make the rocks stand out. If you do put too much on, immediately wipe it off and try again.

The final steps are to paint a bit of black in the center of the tunnel portals to simulate engine smoke, and to put on lichen, ground cover, trees, etc. The example in the accompanying photo was left lichen-less because the tunnel will be used on a holiday layout, and will be covered in snow. But the primary consideration is to have the tunnel look exactly like the surrounding environment. As railfans know, a tunnel is built so trains can go through it rather than go all the way around a mountain, and as modelers we should try to recreate this fact.