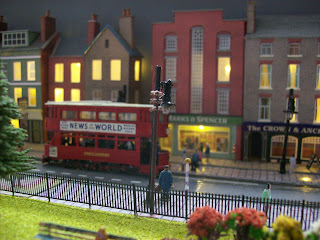 History
The layout is named “Huncote Tramway Museum” which is a fictional location able to run passenger trams of any type and from any real or imaginary authority. 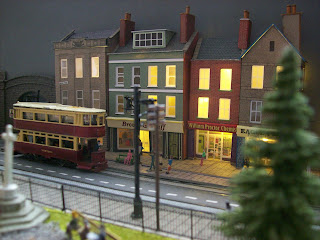 In reality Huncote (where I live) is a small village (population 1000 in 1970) 7 miles south of Leicester, a city in the center of England, and situated within a triangle formed by the old Roman roads of the A46 (Fosse Way), the A47 and the A5 (Watling Street). Within this triangle many of the villages benefited from the extraction of granite. Nineteenth century maps show a mineral tramway which extended from Huncote granite quarry to the south of the village to Narborough quarry in the next village. 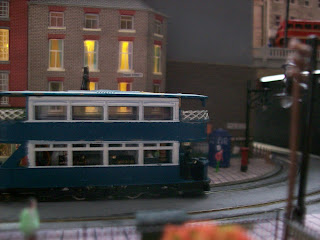 Layout
The layout is constructed on a piece of 50x85cm chipboard and consists of a hidden double-folded dumbell to create a straight section of road, the center of a 20x85cm display with a road bridge at one end and a railway bridge at the opposite end. A dumbell format was chosen to enable the trams to always run in a forward direction. I currently have four operational vehicles (see photographs) with two more in preparation. All are heavily modified Lesney Series 1 Matchbox trams No.3 which are slightly out-of-scale for N gauge but very effective. The tram displaying adverts and colored red is in the original livery of a London Transport tram. Traction is provided by Graham Farish 4-wheel motors which are now, unfortunately, obsolete. A test track, which runs onto and forms part of the railway bridge, is provided across the top of the rear section cover and can be also used to run a couple of DCC steam locomotives. 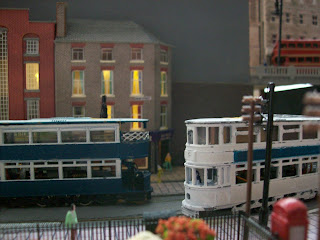 Control
Each vehicle is fitted with a six pin, 2 function, DCC decoder. Three types are used: Bachmann NEM651; TCS EUN651 and Digitrax DZ1251N. Programming is done by a Lenz Digital plus compact and control by an E-Z Command Digital Command Train Control System. Switchable (F10) forward headlights are fitted currently to each tram.
Lighting
Working street lights, bulbs powered by an old DC controller, are fitted and lighting in the buildings is proved a battery powered leds (a string of 20 mini Christmas lights – excellent value for money!) There is also an old ‘tardis’ type blue Police Box which is surmounted by a switchable flashing blue light.