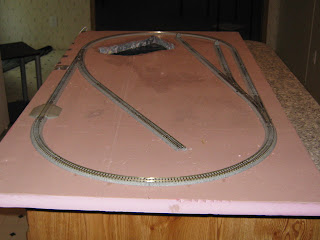 In the pages of model railroad Tips by Robert Anderson, there are recommendations for small layouts, both around and around and point-to-point styles. Small layouts have their definite advantages, such as if you’re strapped for room or just want to see what can be built in a smaller area. However, “small” doesn’t mean Toy-like, unrealistic, or a “spaghetti bowl” full of jammed-in track. In fact, a small layout, if done correctly, can be the catalyst for a lifetime of model railroading,
I’ve been told many times to use the KISS (Keep It Simple Stupid) Principle when building any layout, but never fully realized the benefits of a well-planned, simplistic setup that worked very well until seeing a small layout that was a headache to run. In a small layout, everything should work well, and to do this, the modeler should depend on simplicity and use just enough track to have a purpose for the trains to run and switch inside the small space. I had thought that “complicated” in of itself was necessary to make the railroad effective and fun, but I found out the hard way that this is not the case. There are many more positive results involved when simplicity is used.
At the present time, I’m building a small 2X4-foot N-Scale layout, with a track plan (as shown) that is as simple as it gets. It’s just an oval of track with three single-ended sidings using three #6 switches, and overall it doesn’t get much simpler than this! Inside that oval will be homes, stores, industry, roadways, scenery, a road crossing, a waterway for swimming or fishing, and a tunnel. But most important here is to place everything so that the structures are not on top of each other, as in an actual rural scene.
For good running, do not have the track too close to the edge of the layout, where trains can wind up on the floor if jostled, or if your pet dog gets too ambitious. For this purpose I use 9-3/4” radius curved track, a two-axle diesel locomotive because of the narrow curves, and freight cars that do not exceed a scale 50-foot in length.
One more caution – even though a layout is small, it is not the time to skimp on equipment. Use the best that is affordable and you should get good results and smooth running. To make this 2X4 N-Scale, I’ve used an MRC power pack, Kato Unitrack, and Atlas locomotives and cars. So far so good, and maybe there is something to this KISS Principle!