In about 1895 the Scottish locomotive designer Dugald Drummond then C.M.E. for The London and South Western Railway, was required to design a fast suburban passenger locomotive with a snappy performance for stopping commuter trains into London from the south west. The result was the M7 0-4-4Tank locomotive. 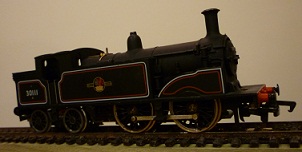 These engines lasted in service for more than sixty years. After electrification ousted them from suburban commuter trains they continued in use on branch  and lesser cross country lines but most especially on empty
coaching stock trains at Waterloo to and from Nine Elms Yard where coaching stock was serviced and prepared for its next journey. Just two examples of this locomotive have been restored, one at the National Railway Museum, York the other, no. 30053 privately. This was running at the Swanage branch, an impressive private restoration of a complete branch line which is now being reconnected to the main line giving full interchange facilities to and from British Rail with whom connecting services are to be run.

My model is of a ‘push-pull’ variant in British Railways days and uses a kit built chassis with a body purchased through ‘Railway Modeller’ magazine for a mere £8! The whole loco cost about £36 to build. While the motor and gearbox are ‘in the firebox’(!), there is a heavy steel weight mounted in the front of the boiler and smokebox directly over the driving wheels. As a result my loco will pull eight or more bogies.

Drummond died on the 8th November 1912 having produced the designs of a large number of locomotives. His most successful loco was the T9 ‘Greyhound’ that like the M7 tank lasted almost to the end of steam traction on British Railways. I have a T9 model and will send pictures of that in a later blog. Drummond had recognised that as trains became longer with heavier bogie stock replacing four and six wheel coaches there was a need for a new generation of much bigger locomotives. His last design was the 4-6-0 T14 ‘Paddlebox’, that was only partially successful on account of high coal consumption.

Drummond was succeeded by Robert Urie who had a\lways been Drummond’s understudy from when they both worked on the locomotives for the North British  Railway in Scotland. Like Drummond, Urie was also a Scot.

After Drummond’s death Urie took the design of the T14 and produced two new 4-6-0 locomotives. These were the N15 (Express Passenger loco) and the S15 (mixed traffic) with smaller wheels. The N15 locos were given names according to the stories of King Arthur, his Queen Guinivere, his court at Camelot and the associated Knights of the Round Table. Thus the N15 class came to be known as ‘King Arthurs’.

My model shown above shows the large diameter driving wheels, the smoke deflectors with their frontal curvature thereby giving the locomotive a very imposing appearance, and the large bogie tender. There was a reason for the large tender because the Southern Railway as distinct from the other three British main line railways, had no water troughs. On the Central and Eastern sections where the journey distances were fifty to seventy miles only, this did not matter and smaller tenders could be used. However the western section which ran right down to Padstow in Cornwall and right past Camelford which is believed to be the site of King Arthur’s Camelot, was more than 200 miles. It was necessary therefore to have adequate supplies of coal and water on the locomotive.

My model is of no.736. It is named ‘Excalibur’ after King Arthur’s legendary sword.

When Urie died in 1937, his successor was an Irishman, Richard Maunsell. He produced improved King Arthur class engines with a more streamlined cab design but most importantly, higher superheat and longer valve travel. Where the Urie Arthurs could run short on steam, the Maunsell Arthurs had the ability to produce steam more freely and could therefore just keep on going on the long and heavy gradients of the West Country. No. 777 Sir Lamiel has been saved and is run from time to time on main line excursions.

Maunsell also produced a more compact Express Passenger loco for the Dover and Southampton boat trains. These were 4-4-0 locos still with the same general appearance with the frontally curved smoke deflectors and were named after the principle and exclusive secondary ‘public’ schools of Britain including Eton, Harrow and Winchester. The ‘Schools’ class took their place as the largest and most powerful 4-4-0 locomotives in Europe and were very popular with the men who drove and fired them.

Three Schools are preserved.  They are Stowe, Cheltenham and no. 926 Repton. This last-mentioned loco ran for a time at Steamtown in Canada. It is now undergoing heavy overhaul at The North Yorkshire Moors Railway in the north of England.

Unlike the irascible Drummond, Maunsell was very popular with his workpeople. Maunsell would say to a newcomer to his design team, “You either will last only a week or you will be here for the rest of your working life.” ALL his team never left him until it was his turn to retire.

Maunsell’s locomotive and carriage designs restored the reputation of the Southern Railway. that had previously lagged that of the other three companies.

The final photograph is of a great Western Railway locomotive. The above photo shows my Castle Class locomotive. It is recorded that in 1904 the magic 100 mph was achieved for the first time by anything man made. At that time the peregrine falcon was the fastest creature on the planet and is now known to reach 160mph when diving on its prey. On 9th May 1904 Locomotive no. 3442 ‘City of Truro’ reached 102.3 mph between the eastern portal of Whiteball Tunnel and Taunton, Somerset on an ‘Ocean Mails Express’ taking mail which had come ashore at Plymouth from New Zealand and Australia to London. At that time the Great Western was competing against the London and South Western for the carriage of the mails from the Commonwealth.

City of Truro was to a design by a former GWR Chief Mechanical Engineer, William Dean. When Dean’s mental faculties began to fail in 1902 his understudy, George Jackson Churchward took over although Dean continued to be nominally CME until his death three years later. Churchward modified the City Class locos including no. 3442 in line with his own ideas of longer travel valves and higher boiler pressure. Thus City of Truro began a tradition of speed on the GWR that has continued into the modern age. Churchward went on to design the 4-6-0 Star class and when he retired in 1922 his successor Charles Collett improved the Stars and produced the designs of the Castle Class. My model is of no. 4073 Caerphilly Castle the first Castle built in 1923. In 1946 I saw 4073 bring the 14 coach ‘down’ Cornish Riviera Express through Reading Station. The locomotive is kept at the Steam Museum at Swindon Wiltshire in pristine condition. The Castle was not the last express locomotive of the Great Western and in 1927 Collett brought out the nominally more powerful King class. GWR footplatemen have told me though, “There is nothing a King could do that a Castle couldn’t also do just as well!” 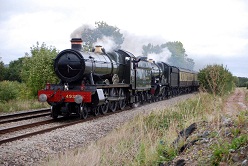 It is an interesting fact that while only 30 Kings were built between 1927 and 1929 production of Castles continued up until about 1950 when the last one, no.7037 Great Western left Swindon Works. Because a number of Stars were rebuilt as Castles including no. 4037 ‘South Wales Borderers’ I am honestly not sure exactly how many there were, but it was around 160. There are seven in preservation including Nunney Castle second locomotive in the attached double headed formation.